Here are some photos from Eliza's fourth dance recital and Elena's first.  This was our first time having to attend all four recitals, with Eliza drawing the Friday night, Saturday day slot and Elena pulling the Saturday night/Sunday matinee slot.  I still have to upload more of Elena's photos from that wonderful weekend but here's what I have so far.   Eliza's recital experience was stressful with a lot of quick costume and tight changes.  But even with all the stress, she still got up on stage and performed with a huge smile on her face.  She has really grown up.  After a near meltdown, referring to herself as a failure because she couldn't change her tights fast enough, Eliza went back onstage and performed flawlessly.  Elena's was just more fun.  Elena didn't do much during any of the rehearsals but some how on stage she actually felt compelled to do the little steps.  I'm not going to say she actually knew her dances or did more than half the steps but sitting in the audience with Eliza at my side, watching Elena's little white tights with white tap shoes and big yellow ribbons go up in the air when she did her little kicks was absolutely thrilling.  It was truly wonderful to experience that first recital with my precious Eliza there to see it too.  She was so excited to see her sister not just stand there I can't describe how it felt to share that joy with her.  I am so in love with these girls. 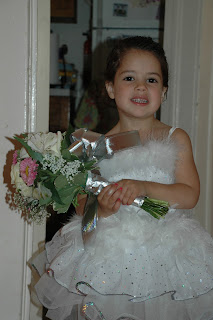 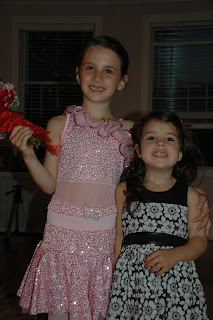 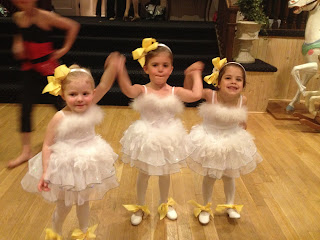 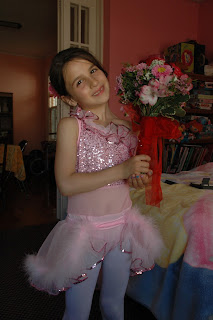 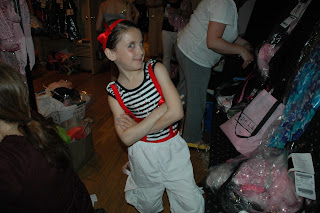 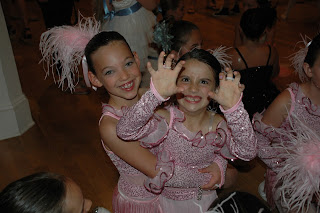 Posted by Litgirl Mama at 8:40 PM No comments:

I was never one of those live in the moment kind of people.  Did I say the wrong thing to some one today?  Did I make a big mistake at work?  Would I be able to pay the rent on time? The only time I lived in the moment was the first 2-3 years of college and my first year or maybe three of motherhood.

It was wonderful, so many afternoons passed lying in my bed with a tiny, sleeping baby across my chest.  I read short stories, New Yorker articles, anything I could easily hold and finish in the time of her naps.  I have so many fond memories of those early few months with the satellite radio in the background and me and my girl, just chilling together alone.

I also cherished my weekly Mom and me meeting and the subsequent playgroup that grew from that.  Friends I'd had prebaby shuffled to the background as my newfound love of Eliza tied me to other new mothers like superglue.  Did you see she sat up today?  Can you hear she's singing a song?  Her first word was star.  I swear, she said a whole sentence but the only word I could clearly make out was star.

Last night, out of the blue, I decided to read some of the old posts here and I couldn't believe how many things I could not recall at all.  I'd completely forgotten about Eliza and her pretend lemonade.  How one time she's happily told her father that she and I spent the day "cuddling" and "kissing ourselves."  In the blur and intensity of that great first love, that real first love that I had for my firstborn, I really thought I'd managed to retain it all but I didn't.  Had I not written these little things down, I'd still be left with those afternoons against the backdrop of satellite radio, but I wouldn't have had so many other things.

I often feel my little Elena gets the short end of the stick.  It's not that I love her less than Eliza, but it wasn't the first time so it's a little less intense, a little more mellow, a little less devoured.  I have no desire to sit on the floor and play games with her.  At the playground, I get kind of bored and don't really want to play lemonade stand.  I often get very frustrated by the fact that I often must beg Elena to come down the steps so we can get Eliza to school or dance class or piano lessons on time.

She often chooses those moments when it's time to go to play cute little games, to hide back at the top of the stairs and pretend she can't find her sweater.  Another cute little trick is that she'll lie on the floor and start to snore so I'll think she's asleep.  She's even got a smile on her face while she makes her little snoring noises.  It's so cute and yet I don't have time for it.  All she wants is to get some recognition for how clever she's being and I just want to scream at her to get down the steps.  Her life has passed by in such a ridiculous blur, without those long afternoons of short stories and satellite radio and dance parties.

It was nice to read how bored I got with Eliza's lemonade parties because I realize it wasn't so much the difference between kids but how I approach parenting.  While Eliza's first few years were spent largely with people around me, many of whom were sharing this great ride of being a new Mama to one child, most of my time spent with Elena was in isolation.  There were no playgroups or gymnastic classes or music classes in her first three years.  The first three years of Elena's life have been spent as the shadow child, the one who gets dragged to all the fun stuff her sister does while she crawls around on the floor in the background.  A fantastic napper, Elena spent much of our solo time sleeping while I worked or dealt with other things.  The solo trips to museums and parks just didn't happen with Elena as they had with Eliza.  Some of that is just how it goes with the second kid.  And some of it was my own response to so much isolation.  While I often had friends to share my time with Eliza, with Elena I've been very lonely.  I wonder if this happens frequently with the second kid as well.  You are isolated by the fact that you're simply busier now and many of those people who surrounded you with the first kid are now juggling two and maybe three and just don't have the kind of time you had.

Or is it that you lose yourself in that first one, almost like you're drowning, but with the second you start to surface.  Friends you adored before children start to move back into the foreground.  Work or hobbies you had before children start to find their way back into your daily life.  I know going back to work full time when Elena was only two felt awful, but then when I was at work, it was almost like I'd woken up from a kind of isolated slumber.  I was suddenly around adults again, having conversations that didn't segue into Elmo's theme song.  Going to the theater to see a play was suddenly so much more wonderful then I remembered.  Spending time with a friend over a beer eating french fries without kids tugging on my sleeve was the best thing in the world.

I wondered, had I fallen out of love with my kids?  I realize now I was simply struggling to find some kind of place to be me again.  A new me with a life outside my kids, but still loving my kids.

Sadly, I still spend way too much time with the kids alone.  I so wish I had some one, anyone, to share this journey with me because a less lonely me is a better mama.  But even in that isolation and the depression that's set in since the onset of my mom's illness, I still manage to make at least a few great moments of each day with the kids.

And I went with it.  Pretended to eat the food she'd brought in her little toy school house.  Her face lit up, like watching me mime eating plastic carrots had to be better than Disney World.  I was only half with her, still drifting back to the newspaper article I'd been reading when she found me but my half assed effort still pleased her.  She says adorable things a lot of the time.  I'm going to list a few now, just so I "keep" them.

"I'm building a new mama out of legos because Eliza gets all the love."

"I'm lonely.  Come sit with me." At the lunch table.  She has lunch before she goes to school and I tend to eat later and spend the time that she's eating lunch packing up her stuff for school but she has not problem telling me to join her.

"Can I have a butsy sandwich?"

"Mama!  I pooped on the potty!  Oh, what's that toothbrush doing in there?"  yes, in her haste to get to the potty, Elena had some how managed to dislodge my expensive electric toothbrush from it's stand and it fell into the toilet.  Sorry if this is TMI but it was funny.

There's so many more things but suddenly I can't remember them.  I've spent a lot of time whining about what I've lost and I realized that this blog was always about writing down what I had.

And what I have is a lovely little family.  At the end of the day, I am so very grateful.

Posted by Litgirl Mama at 8:31 PM No comments: