So many moments, so much to love

My kids amaze and astonish me everyday. Of course that's not to say life's perfect--they can also drive me crazy but for the most part, I can't believe how much fun they are.

We did an overnight trip to NY to stay in our old apartment while their father is away. We do this from time to time and while it's great to have a free place in NY, it's hard to stay in a place that I once lived that's not mine anymore. Eliza feels the sadness too, really missing her father when we're there like any minute he might come home and we'll all be together. I'm glad that he's okay with us using the place as a hotel and his new girlfriend doesn't object to our presence.

At night, long after they should have been in bed, I chased them through the apartment, something we never do at home. I love chasing children around so it's odd to think that we don't do this and our apartment with it's variety of rooms that have more than one entrance is a perfect place for this sort of behavior. But I guess we switched into vacation mode and something about being in a home that wasn't our own freed us from the same old boring routine.

The following day was a marathon--after breakfast in a local diner where I was sure I'd have a nervous breakdown if our food didn't come now, right now, Eliza walked 20 blocks (with Elena in the stroller) to Times Square. While Elena napped in the stroller, Eliza and I ducked into a crowded deli for a smoothie. It was quite a challenge to navigate with all the people, rushing to pay for their lunches but we made it. Then it was on to the Times Square Toys R Us for a ride on the ferris wheel. Although I swore I'd buy no toys, absolutely nothing, we left with a barbie for each kid. Founding ourselves in the middle of seemingly wall to wall bodies on 44th Street, I managed to push us through to the Snack Shack on Eighth Avenue. I later found out that the mass of bodies on 44th was because the MTV building was evacuated following an earthquake we did not feel.

Back to the snack shack and us in a very narrow, twisty line to order the world's best fast food. This is definitely not the place for a single mother with a stroller but I wanted that fast food and I was gonna have it. With no tables available, I managed to get the girls to a large counter section and situate them on stools far too high for safety's sake. It was a tough lunch and the place only got more crowded but we made it and dammit, that fast food was worth.

Then onto my main attraction, the Discovery Channel's Pompei exhibit. This exhibit is so pricey, I really debated the merits of taking two small children. But oh it was so worth it. We had an absolutely splendid time and Eliza seemed to enjoy the history of it all. The exhibit also included a time lapse film that portrayed the volcano a bit too realistically. Perhaps that was too much for my girl but I carried her through and she enjoyed the artifacts from the ancient city. Elena kept bouncing around saying "POMPei POMPei," completely delighting even the most scowling, curmudgeonly adult. While people gathered around another short film showing footage of Vesuvius erupting in the 1940s, Elena started to perform her "Party in the USA" dance sure that all those people standing there were in fact her devotees. We capped off the exhibit with a visit to the Cake Boss bakery downstairs, probably the highlight of the girl's day. As they sat there with there goodies and I sat there amazed at how well the day had gone I realized I'd never wanted an conventional life.

As a child, the idea of a house, a picket fence, none of it ever appealed to me. I wanted to travel, to have some freedom, to see things and dive into new worlds. As a single mother, I long for that partner, that person to help me navigate with in these new worlds. And hey it would be great if I had that but it's not so bad having the life that I have now. I only pray that my body holds up, that I stay healthy and strong and that work continues to come in like it is now, just when I need it, to keep up this unconventional but really, a very great life.

Today is my mother's 73rd birthday. We spent the day with her and she's so weak, so tired but she did okay. She ate two helpings of the lasagna I made and didn't have any nasty afferaffects. She actually told me that after her second helping she felt much better than she had all day. Oh wouldn't it be great if my homemade lasagna could do that, could cure my mother of the cancer that is so deadly. My girls both sang happy birthday to her and gave her lots of birthday hugs. It wasn't dinner at the Taj Mahal but still, it was a pretty good day.

Capped off by the beautiful card Eliza made for my mother, all by herself with no help or prompting from me. She drew rainbows on the front and on the inside and wrote "I love you into the sky. You are the best." I did not tell her what to write. I don't know if my mom was that impressed but I sure as hell was. Eliza also picked out a yellow sunshiney card from the store that plays "You are my sunshine" when you open it. I could sing the same thing about both my girls and my mother too.
Posted by Litgirl Mama at 6:53 PM No comments: 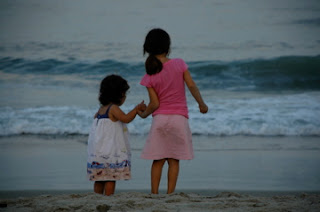 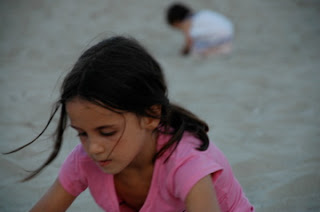 It's not all doom and gloom here this summer. Aside from our Disney trip, we've also managed to make it to the beach/pool many times and gather with friends on a regular basis. Lately, it's been so hot in my apartment we've been going to the beach in the evenings to cool off before bedtime. I leave a large soup pot on the back porch to rinse off the sand when we get home. It's sooooo hard to get the girls in the bathtub but boy do they fight for the opportunity to plant their naked butts in a soup pot filled with cold water! We can walk to the beach from our place which is wonderful. Now that we've started doing our "evening dips," I wonder why I waited until August to add this to our summer routine. There's still so many things I want to do before the summer ends but I know there won't be time. Oh how I love the long days and beach evenings with my wonderful girls!
Posted by Litgirl Mama at 4:33 AM No comments: