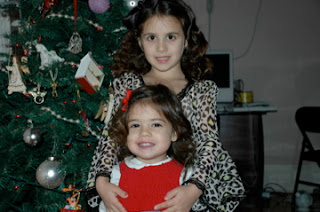 Just in case anyone checks in to see how my girls are doing, here they are. This photo was taken on the morning of December 20th, 2011, shortly before Eliza's holiday concert at school. Our Christmas was fragmented but wonderful. As always, the good moments pass by far too quickly. I'm trying to savor as much of these two weeks away from work as I can. Happy 2012 to anyone out there who might read this or who has ever checked in on me and my wonderful, amazing, fabulous girls.
Posted by Litgirl Mama at 7:21 PM 3 comments:

He Will Fill Us With Goodness and Light