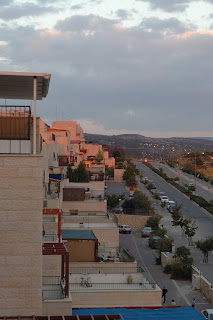 I could tell you so much about my trip to Israel and why it took me over a week to fall in love with the place.  But Eliza's awake and there's so much to tell in so little time.  I could tell you about the hills of Ramat Bet Shemesh, the town where Meredith lives.  Driving through the desert and passing camels along the side of the road.  The makeshift bedouin villages built from tin walls and cloth.  The unlevel, winding, narrow streets of the Old City in Jerusalem that feel like no other place I've been to in the world.  My favorite place was Caesarea, a beautiful town of Roman ruins along the Mediterranean Sea.  I also loved the Dead Sea and a dinner we had one night in Netanya.  Netanya sounded familiar to me for some reason.  While we had dinner along the Mediterranean Sea that night, David told me the hotel next door had been bombed a few years ago.  Hence, it's familiar name.
The apartment we rented had a patio that overlooked a small park with a playground.  Almost every morning, Eliza and I had breakfast on that patio.  On days when we couldn't because we had to pick up her father at the airport or report to the community center early for Rafi's (Meredith's oldest son) Bar Mitzvah, Eliza repeatedly asked for cereal on the patio.  Upon our return, when her brother asked her what she did in Israel, Eliza said "I had cereal on the patio."
It was an emotional journey, the pain of my friend's departure some how magnified in seeing her again.  Ramat Bet Shemesh, the town she lives in, is much more religious than I expected.  Signs in every window along the commercial district urge women to wear skirts to their ankles, shirts to their wrists, clothing that is loose and baggy.  Shops close early, by 6 or 7pm to encourage a more religious atmosphere.  Even though I brought every conservative clothing item I own, I still felt like people stared at my modernity.  While I was thrilled to see my friend, I felt suffocated by the sheer monotony of every person I saw.  As a New Yorker accustomed to diversity, I truly felt like a stranger in a strange land.  Add all signs in Hebrew and businesses in Hebrew and for a while, I completely felt lost.
But I had a wonderful time, taking Eliza and some of Meredith's kids to the playground and chasing them one afternoon through the streets of the town after hamburgers.  On the Sabbath, everything shut down, no cars were driven through the town and we walked in the streets completely unafraid of traffic.  It was not uncommon to see a five-year-old walking hand-in-hand with a two-year-old and no adult in sight.  While I felt a bit oppressed, my daughter ran up the sidewalks from playground to playground with the glee of the truly free.
Going in chronological order, let me present you with a photo of the sunset over Ramat Bet Shemesh taken on the second day of our journey from Meredith's upstairs patio.
Posted by Litgirl Mama at 6:59 AM

very interesting. i like hearing about other places and their customs.