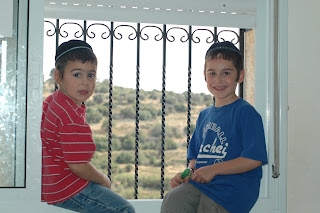 If you read my past entry, then you know Ramat Bet Shemesh is the town my friend lives in.  The apartment we rented was a lovely two bedroom with a large patio that overlooked a grassy park.  Each day started with cereal, yogurt and juice on the patio.  Although I felt out of place in Ramat Bet Shemesh, I loved the quiet solitude of the apartment Eliza and I shared.  We had the apartment to ourselves from Monday through Thursday.  C arrived on Friday morning and while I was happy to have a travel companion, on Thursday night I mourned the loss of the quiet time with my daughter.
In retrospect, I should have enjoyed the time more than I did.  Eliza and I both slept late on Tuesday and then set out to the patio for our breakfast.  Looking down on the park, Eliza saw a playground with blue slides.  We ventured down there but I quickly noticed that only small boys were currently using the playground.  A group of girls played further up the hill on a grassy area.  I wondered if the Orthodox law of separating females and males had brought about this demographic and wondered if I should take Eliza from the playground.  Eliza happily climbed the ladders and walked across a large covered bridge but she didn't care for the covered blue "tunnel" slides.  She stood at the top and cried for rescue.  The loud voices of the boys speaking Hebrew seemed to intimidate her as well.  After only a few moments, she asks to go to Meredith's.
On the way to Meredith's we stopped by a local market Meredith had pointed out.  I noticed few fresh items (Meredith told me this year in their religion they have to "let the land rest" so there's not a lot of produce available) and containers of food marked with Hebrew lettering.  Photos indicated frozen carrots, green beans, corn.  I picked up a box of Trix cereal because it was the one cereal I recognized.
Later that day, Meredith and I took the kids to a big playground near her apartment.  There are playgrounds on every block in Meredith's neighborhood which is a wonderful thing.  However, they are different from American playgrounds.  Instead of grass or a soft, padded surface, the playgrounds are floored by small rocks which the kids enjoy throwing at each other or using to coat the slides.  Most of the slides are tunnel slides and there are few swings.  Eliza had fun playing with Meredith's kids who she'd cowered from the day we arrived.  The following day, we took the kids into town and while Meredith's mom and the older kids ate hamburgers, I chased the other kids through the streets of the town.  At the market district's town center, there's a small grassy hill.  Eliza and Meredith's two little boys, Simmy and Doniel, loved running "up the mountain."
Still, the upcoming Bar Mitzvah allowed Meredith little time with me.  Although I understood this, I longed for some quality time with her.  I've always felt that Meredith is my sanity and without her I was losing my sanity.  I longed to venture into Jerusalem and could have done so, leaving Eliza with Meredith.  But I was afraid of taking the bus and never finding my way back to Ramat Bet Shemesh.  So I felt a little trapped, stripped of my independence, and somewhat alone.  I should have trusted that once the Bar Mizvah ended, Meredith would make time for me but I started to get angry.  I had to be careful with what I wore, I couldn't understand the language, and kids who all looked like virtual clones of each other, threw rocks at the playground.  Had Meredith really chosen to leave me, a very close friend, for this desolate and suffocating place?
I then made up my mind to dislike Israel.  I'm glad to say in a few days, that wonderfully changed.  The photo to the right is of Meredith's two youngest boys, Doniel and Simmy, sitting in the window of Meredith's apartment.  On the left is a photo of Eliza playing piano in Meredith's living room.  These photos are from the first few days when it was just Eliza and myself hanging out at Meredith's apartment like the good old days.
Posted by Litgirl Mama at 6:48 AM

I can understand being frustrated by all of that. In a way you feel like you were dumped. I'm glad that you were able to work your way through it. Its nice to know that you weren't dumped.