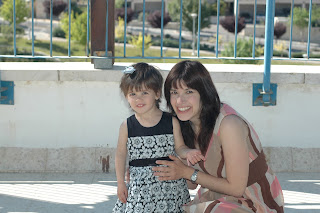 I don't have the greatest luck uploading photos onto this website so I'll just write a bit about our trip to Israel and post some photos later.  As always, I have so much more to write than my limited time will allow.
Our first week in Ramat Bet Shemesh was a little bumpy, but as I wrote before, in retrospect, I should have enjoyed it.  The town had playgrounds on practically every corner and we managed to buy enough food to keep us going.  C arrived on Friday and seemed pleased with the place when I took him to the market square (called the Meercaz) for lunch.  He ordered a falafel and was charmed when he had to illustrate his order for the non-English speaking worker by pointing to the vegetables he wanted in the pita.  We got a big container of fresh strawberries from a teenager who looked Arabic to me.  On Friday night, in celebration of the Sabbath and the out-of-town guests, Meredith and David hosted a catered dinner at the community center where Rafi would be Bar Mitzvahed the following day.  I realized as I looked around the table at Meredith's mom, David's Mom, Meredith's cousin Becky and David's good friend Ira, that I'd spent so much time at Meredith's house, these people were like my own family.  There was only one couple present, who currently live in Jerusalem, that I'd never met before.  It was a great reunion.
Eliza had a great time wrecking havoc in the community center with her "cousins."  Meredith's daughter, I must say, seems to be a bit of a trouble maker.  She taunted a group of kids outside the locked community center door.
When we left the dinner that night, the streets were alive with people.  Kids of all ages roamed the streets in packs with no adult present.  It all felt a bit surreal.  Upon arrival in our apartment, we felt a little self-conscious turning on the lights (on the Sabbath, it's forbidden to flick switches, seal envelopes, rip tape, etc.)  Our apartment faced a big park that was well-populated.  We worried that people hanging out in the park below would see our lights come on and hurl rocks.  But no such thing happened.
The following day Rafi was Bar Mitzvahed but I had to listen to this service behind the cloth screen that separated the men from the women.  I was mildly annoyed, having flown 6,000 miles for this event but Rafi's angelic voice from the other side of the curtain nullified my irritation.  I spent most of the morning physically restraining Eliza from the long trays of cakes, cookies, chips and breads set up for after the service.  By the time the locals left and it was just Meredith's closest friends and family settled in for the catered lunch, Eliza bounced and writhed in a manic state of over-stimulation and exhaustion.  C and I made a quick exit and I'm happy to say I missed a speech that David detailing why Christians and Jews shouldn't intermarry.  I know this has always been his view and I've no feelings on the subject one way or the other.  I'd flown a long distance and already felt out of place.  I didn't need to be reminded that in this crowd, in this country as a matter of fact, I was an outcast.
We returned to the community center for dinner leftovers that night.  Meredith's cousin Leanore called the "meal" deja food.  It was nice to gather with my friends in a less informal atmosphere with most of the activities behind us.  Rafi asked me if he could take Eliza to a small playground and I said yes, then panicked after they left and I had no idea where this playground was.  Meredith and I found the two of them in a playground and broke up the nice moment the two kids were having.  I wish I'd trusted him enough that night to let it go.  But Meredith and I had a nice time, perhaps the first real moment we had together without other people around.
But I definitely felt out of element and the childish, paranoid part of me was concerned.  Now that my friends had made this big leap in celebration of their faith, would their world no longer include me, a non-Jew?
Orthodox Jewish law prevents picture taking so this photo of Eliza and myself on the day of Rafi's Bar Mitzvah taken on our apartment patio is one of the few records from that day.
Posted by Litgirl Mama at 6:45 AM